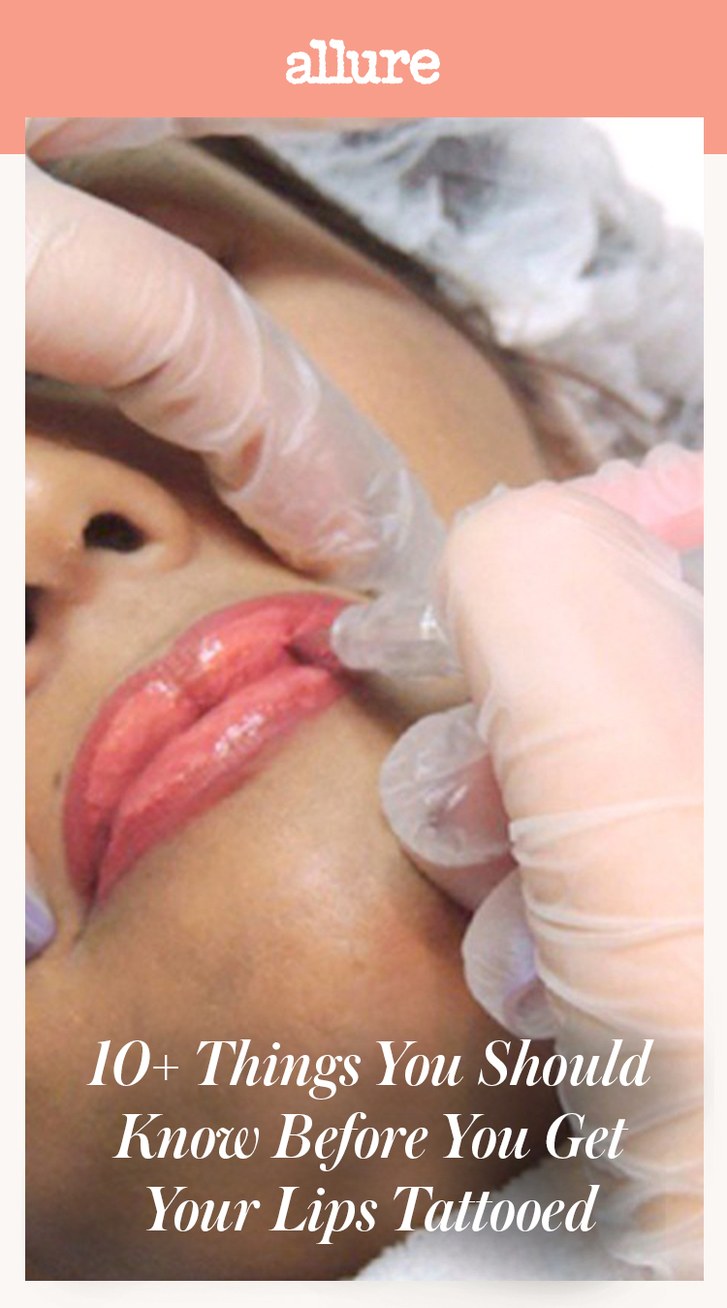 I saw this article on Allure and I thought it’s helpful considerations before you get your permanent makeup on.

Ever since Kylie Jenner did for lips what Cara Delevingne did for brows (i.e., started the whole the-fuller-the-better trend), people have been searching for the single product or procedure that will help them achieve that same plumped-up look. We know that Jenner’s lips are the result of injections—and one of the latest trends is nearly as extreme: lip tattoos.
After a brave writer for Australian Cosmopolitan got her lip liner tattooed on, we needed to know more about this procedure. We asked Amy Kernahan, a permanent-makeup artist in New York City who’s tattooed brows, eyelids, and lips for ten years, to fill us in (no, not literally). Here are the ten things you should know if you decide to enter the world of permanent makeup, according to her.

Lip tattoos are meant to enhance lips, not create actual fullness. This procedure is designed to define lips, not to create volume or puffiness, says Kernahan. “It will just give you the appearance of a full lip,” she says. “Since part of the process is outlining right on the border of the lip, I’m only helping to give your lips the appearance that their fuller.” It’s all about the illusion.

The tattoo doesn’t just go around your lip like traditional lip-liner application. “I do an outline on the border of the lip, but I’m also shading the color down into the middle of the lip in a circular motion to give it more of a blended look,” says Kernahan. “I leave the interior part of the lip without color.”

It’s possible to get a color that’s close to your natural lip color—but that means it won’t last as long. “The more natural the color, the more frequent your touch-ups are going be,” says Kernahan. “If someone comes in and says, ‘I love my color; I just want it to be a hint more,’ they’re probably going to have to come in once a year for touch-ups to refresh that color.” Kernahan suggests tattooing your lips one or two shades darker or brighter depending on your natural skin tone.

Most places use pigment instead of traditional tattoo ink (which is why it fades). Years ago, permanent makeup was applied with regular tattoo ink. That’s why it often looked so unnatural. “When you get a body tattoo, it’s usually done with ink, which has a very watery consistency,” says Kernahan. “Pigment is thicker, so it gives that more natural powdery finish. But it does exfoliate out of your skin after 12 to 18 months. And since you eat and drink with your lips, it’s going to happen faster.”

Yes, it’s painful. Lips are especially sensitive, so if you’re considering getting this done, you may want to pay extra for an anesthetic to block the pain. “Since lips are very vascular, I share office space with a plastic surgeon and my patients have the option of paying an extra $150 for that,” says Kernahan. “If they choose to have an anesthetic, I can get the procedure done much faster.”

The healing process takes about ten days. Kernahan advises her patients getting lip tattoos to schedule the procedure for a Thursday, so they can let the swelling and dryness die down over the weekend. “The lips will look very dry and chapped as they heal,” says Kernahan. “The color gets lighter, and then as the skin heals, it comes back. You usually see the full, truest color after about two weeks.”

If you’re prone to cold sores, make sure you’re taking medication to prevent them. “The stimulation from the needle can bring out cold sores and that can really ruin the procedure and make the healing process much worse,” says Kernahan.
It doesn’t work on every skin tone. “I have to turn away a lot of people that have that darker skin tones, because they can hyperpigment. The needle abrades the skin, so when they heal, a lot more pigment is produced, and their lips could actually get darker,” she explains.

If you don’t like your tattoo, you can get it removed with a laser. “If anyone asks me to tattoo outside of their lip line, I won’t do it. If they don’t like their natural lip line, I tell them to go get a filler first,” says Kernahan. And if you absolutely hate your lip-liner tattoo, there are laser treatments that can sometimes remove the color. But that involves more money and more pain.